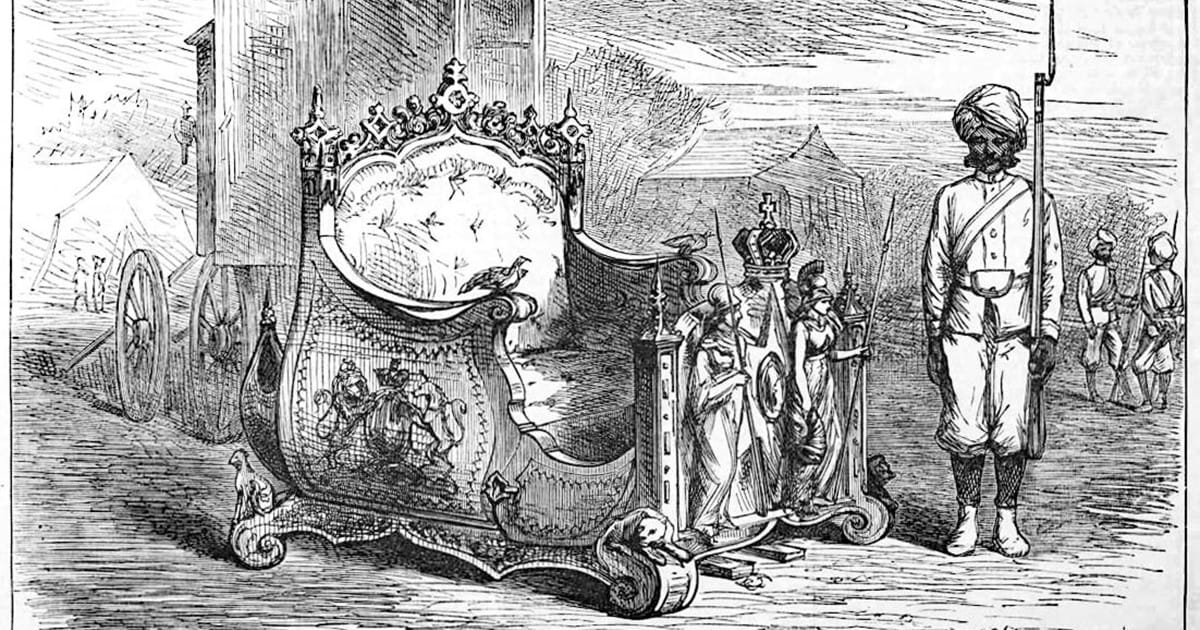 A small 20th century model of a Durbar elephant, mounted in coloured gem-set silver-gilt with a howdah, trappings and cast figures of a maharaja and his mahout, was sold at Matthew Barton Ltd's European and Asian Works of Art auction on 14 July this year. This perfect ornament for a writer's desk or some nook in a gentleman's snug, brought to mind the imperial Delhi Durbars (Indian ceremonial receptions) of 1877, 1903 and 1911, the latter attended by George V and Queen Mary as Emperor and Empress of India.

The splendid sights of those occasions were recorded in countless paintings, prints and photographs and, in the case of the Durbars of 1903 and 1911, on film. Preserved in the collection of the British Film Institute is footage of the inaugural State Entry into Delhi on 29 December 1902 of Lord and Lady Curzon, Viceroy and Vicereine of India, accompanied by the Duke and Duchess of Connaught, the Nizam of Hyderabad and an entourage of princes, maharajas and other dignitaries riding at a stately pace on magnificent and magnificently caparisoned elephants. Reports of the ceremony were published across the globe: 'the Viceroy and Lady Curzon [were] seated in a gold and silver howdah on a gigantic tusker lent by the Maharaja of Benares – the same beast [and howdah] which Lord Lytton rode at the Proclamation Durbar of 1877. . . Their appearance was the signal for loud and enthusiastic cheers, which echoed continuously along the route.'

This Benares 'State Elephant' had created quite a stir in 1877, at the Durbar organised for the declaration of Queen Victoria as Empress of India,. According to The Illustrated London News (London, Saturday, 27 January 1877, p. 90a), on that occasion this noble creature appeared 'to have a fair idea of his own importance. Instead of walking on quietly and steadily as a well-conducted elephant should, he would insist upon stopping every now and then and taking a look around. Nor could anyone persuade him to move until he had satisfied his curiosity. The result was that every few minutes the ''halt'' had to be sounded, so as to preserve the line of procession unbroken.'

The picture of opulence which the enormous Benares tusker and his finery created at the head of Lord Lytton's 1877 procession is captured in the contemporaneous lithograph by Henry Calton Terence Maguire (1832-1916), which illustrates the cover of the music for 'The Empress of India's Grand Processional March' by John Pridham (1818-1896). Maguire's scheme, which includes a background drawn from images of the Durbar's Throne Pavilion, takes as its central figure Lytton's entry as recorded in a sketch sent by Lieut. Charles Pulley of the 3rd Gurkhas to The Illustrated London News (London, Saturday, 27 January 1877, pp. 74 and 89).

The howdah in which Lord Lytton was seated (and later which carried Lord and Lady Curzon) was made by Hamilton & Co. of Calcutta. 'It was adorned with gold, silver, and purple velvet, and displayed the insignia of Royalty. In front stood the figures of Britannia and Minerva, each holding a spear; the former also bearing a cornucopia, the latter with an owl on her helmet. The four feet of the howdah, in carved silver, were formed to represent four animals, the British Lion and Bengal Tiger, couchant, the Unicorn, and the Dragon. The Imperial Crown, in purple velvet and gold, was placed between Minerva and Britannia; below it was the gold Star of India, with St. George and the Dragon. The Royal Arms, in gold on a silver ground, shone on the panels, and the rose, shamrock, and thistle were among the other decorations. Lord Lytton, sitting in this howdah on his way to the Durbar, was sheltered from the sun by a gorgeous umbrella and fanned with peacock-feathers.' (The Illustrated London News, London, Saturday, 10 February 1877, p. 138a)

Hamilton & Co. was established in 1808 by Robert Hamilton (1772-1848), who gave his name to the firm but severed his connection only nine years later. He left his partners to build the business into the most successful manufacturing and retail jewellers, gold and silversmiths in India. At the close of 1875 a correspondent from The Times of India (Bombay, Friday, 31 December 1875, p. 3f) was awestruck by what he saw at Hamilton's: 'The visitor finds himself not simply surrounded by the ordinary display of the English gold-smith's and jeweller's art, but introduced to forms of beauty – new, rich, and strange, and of a lavishness truly Oriental. Here in one show-case alone are found ''surpaitches'' of diamonds of great value, used as turban ornaments; belts studded profusely with gems of price; . . . stars of brilliants; necklaces of precious stones which in England would indicate an extent of wealth indeed remarkable; swords inlaid and embossed in pure gold; [&c., &c.]'

The most interesting passage in the correspondent's report related to Hamilton's workshops, where he found 'scores of men and boys, all clothed in white linen . . . engaged in what appears to the visitor a monotonous tap-tap-tapping, but on examining further, we find out how the beautiful ''reliefs'' are produced and discover in the men who are fashioning shields, centre pieces, State chairs and goblets, very disciples of Benevnuto Cellini himself. Here, too, we witness the cunning fingers forming the bright settings for still brighter brilliants, which lie on the benches before them, and the silent graver or the skilled native artificer's patient hand cutting out beautiful designs in the precious metals, apparently carelessly scattered all around; while in the worktrays of the artificers seated at the benches are polished and unpolished stones of all varieties, in process of manipulation or setting. . . . One emerald, we noticed, was the size of a large egg . . .'

In the silver factory he found 'castings in gold and silver of horses, lions, and elephants, destined, when fully shaped, to adorn ''howdahs'' and ''State chairs,'' several of which we saw in process of manufacture, while in a side room just completed we were shown the Viceregal State silver howdah [for Lord Lytton's use at the Delhi Durbar of 1877] – a truly magnificent work, and such as would do credit, we venture to say, to any silversmith in the world.'

So, it was to audiences back home in the British Isles, with a taste for details of this faraway Imperial pomp and pageantry, for whom John Pridham wrote 'The Empress of India's Grand Processional March.' In fact, the piece, which begins with a marcato chord marked 'Majestic,' is a melange of passages, passing from an 'Indian Air' to 'The British Grenadiers March,' and an animated 'Indian Jig and Round Dance' to a final flourish in 'God Save the Empress.'

Pridham, who was born in Topsham, Devonshire and lived throughout his life in England's West Country, was a 'Professor of Music' who wrote a number of marches and other rousing compositions. One was 'The Life Boat,' a descriptive fantasia upon popular nautical melodies, while  his most popular was 'The Battle March,' published in 1857. Later known as 'The Battle March of Delhi,' it was another descriptive fantasia, the score of which includes lines of dialogue: 'The clock of the Great Mogul strikes four,' 'The mutineers are alarmed at the approach of the British Cavalry,' 'General Wilson orders an immediate attack,' 'cannon!' 'See, the conquering hero comes,' and so on. Pridham's 'Battle March' proved so successful that new editions were published well into the 20th century. Among his many other pieces were 'The Khyber Pass March,' for which the publishers, F. Pitman Hart & Co. Ltd., provided a beautiful colour lithograph cover of a regiment of the Indian Army threading its way through the narrow way between monstrous cliffs; and 'The Abyssinian Expedition' (a 'Grand Military Divertimento,' descriptive of the Battle and Entry into Magdala) the music cover of which, published by Brewer & Co., was another colourful lithograph, showing British troops in their red uniforms in the heat of battle.

The little gem-set elephant, thanks to Matthew Barton's sale, has found a new home, exchanging hands for a comfortable £900. In its wake we are left to marvel at the exotic splendours of ceremonial India under the British Raj as well as the tradition of parading elephants which continues today in India and at Kandy, Sri Lanka.

An engraving of the silver and silver-gilt howdah made by Hamilton & Co. of Calcutta for the occasion of Lord Lytton, the Viceroy of India's entry on the Benares 'State Elephant' at the Delhi Durbar of 1877. (The Illustrated London News, London, Saturday, Saturday, 10 February 1877, p. 140)