BLOG: Freaks of fashion, war and the urge to 'Buy British' by John Culme 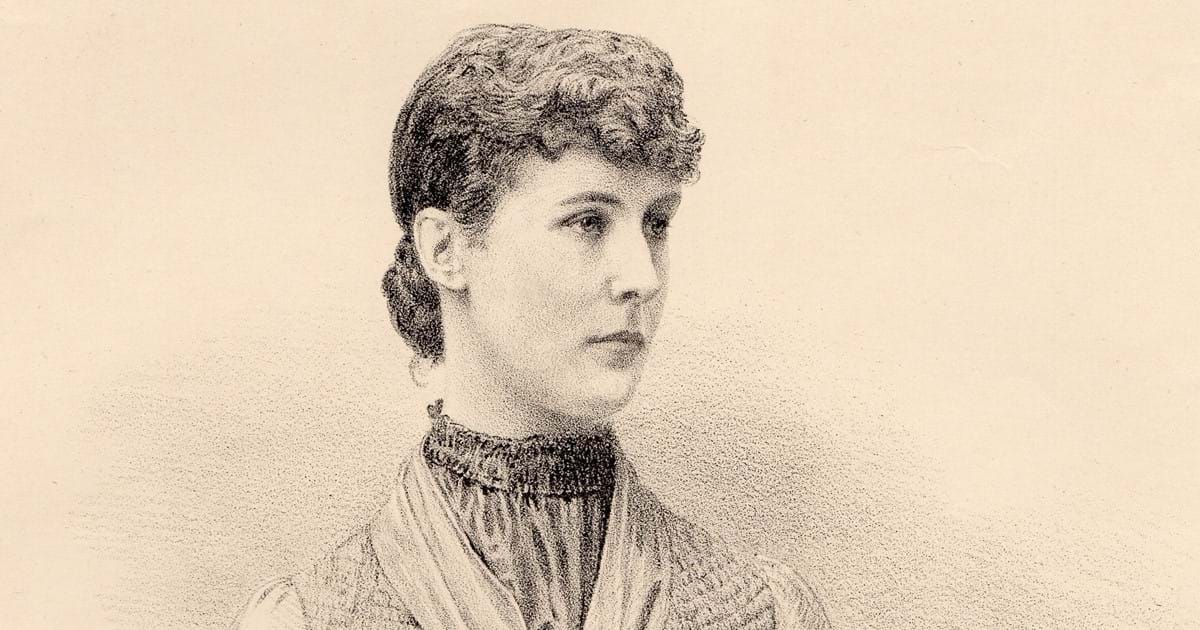 In 1968, in the wake of the spontaneous 'I'm Backing Britain' campaign, we here in the United Kingdom were urged to 'Buy British.' Although it was a short-lived cause, this wasn't the first time such a slogan was heard and nor, surely, will it be the last.

Almost a century before, in the late 1870s, there was a crisis in the British woollen industry, when garments made from home-produced long lustre wools had become unfashionable. In its survey of London and Parisian fashions in June 1880, The London and Paris Ladies' Magazine of Fashion, Polite Literature, etc. told its readers that, 'the manufacturers are surpassing everything they have done before; we hardly know which excels – the cotton, woollen, or silk . . . All rough materials are considered in bad taste.' And in the following October's edition of Truth, the 'Augustine to Augusta' column stated that, of 'the many novelties in woollen and mixed tissues for autumn, the cloth, Indian and French cashmere, drap tricot, poplin, and striped limousine are the chief favourites; the cashmere called Ladack [sic], fancy Cheviots, Meltons, tweeds in minute patterns of silk, such as dots, called pointillis, and granitis, small checks, soft twills, and serges are also much in favour.'

This sudden hunger by the fashion-conscious for foreign-made, soft-clinging materials caused near destitution in some parts of the British woollen industry. A number of aristocratic and wealthy ladies sought 'to remedy the consequences of a freak of fashion' by 'wearing the products of our looms.' So it was that Alice Maria, Countess of Bective (1842-1928) and her friends promised to encourage  British woollen manufacturers. In their pamphlet, The British Woollen Trade (1881), the Countess wrote that their association aimed to promote 'not only the lustre fabrics of Yorkshire but the tweeds of Scotland, the homespuns and flannels of Wales, and the friezes of Ireland.'

As a notable member of society, Lady Bective was well-placed to lead such a movement. Her elegant sense of dress drew frequent, complimentary remarks from the Press and when her husband's former butler, one Cummings, removed jewellery from a basket on her dressing-room table, reports of his disgraceful conduct and ultimate Old Bailey trial appeared in newspapers for weeks. The items in question were a necklace, a tiara, five stars, a diamond bracelet, a diamond and a diamond and pearl ring and two ruby and diamond rings valued at £3,070, which today is the equivalent of about £200,000. On the night in question, 24/25 July 1880, Lord and Lady Bective had returned home (18 Portland Place) at 3a.m. from the Prince and Princess of Wales's ball at Malborough House.

The Countess of Bective's efforts on behalf of the woollen industry were acknowledged many times, no more so than at the special event organised in 1882 at Saltaire. This model village and woollen manufacturing centre near Bradford in Yorkshire was built in 1851 by the industrialist Sir Titus Salt (1803-1876) and is now a UNESCO World Heritage Site. The event in question was the annual Saltaire Conversazione, enlarged on this occasion to include a ball to which the invited ladies were asked to wear dresses made only from material of British manufacture. There was a hearty response to this appeal: 'Lady Betive attended the function in a white dress of English sateen, tulle ribbon, and silk dotted with stars of diamonds.'

A banner stretched across the orchestra front in Saltaire's Victoria Hall, brilliantly lighted by electricity, read, 'SUCCESS TO THE ASSOCIATION FOR THE ENCOURAGEMENT OF BRITISH WOOLLEN MANUFACTURES.' Heraldic achievements were also part of the sumptuous decorations, including the arms of the Salt family, those of the City of Bradford and of the Earl of Bective together with the arms of his father, the Marquess of Headfort and of Lady Bective's father, the Marquess of Downshire. (The Illustrated Sporting and Dramatic News, London, Saturday, 4 February 1882, p. 514; Shipley Times and Express, Shipley, Saturday 1 December 1928, p. 8f)

In fact, although Lady Bective and her friends were perceived to have led 'THE COUNTESSS OF BECTIVE MOVEMENT [to] BUY BRITISH DRESS GOODS,' the initial thrust to save the British woollen industry had come from William Foster (1821-1884) of Hornby Castle, owner of worsted mills (later known as Black Dyke Mills) at Queensbury on the outskirts of Bradford. He estimated that £6.5m had been lost to foreign competition, mainly from France and Germany, 'not from superiority of texture, but in blind obedience to the mandate of fashion which Paris had interestedly promulgated. . . . Mr. Foster did much by his personal exertions and influence to secure the change of attitude which has been effected in regard to the recognition of British productions. . . . There is no longer any need for the English manufacturer to seek to pass off his goods as of French make. That they are the products of English looms is now a recommendation for them, not, as before a bar to their adoption.' (The Exeter and Plymouth Gazette, Exeter, Tuesday, 27 September 1881, p. 2b; 'The Fosters of Queensbury,' Fortunes Made in Business, Sampson Low, Marston, Searle & Rivington, vol. II, London, 1884, pp. 48-51).

Similarly, it was a deputation of Birmingham manufacturers via their local Chamber of Commerce who shortly after the outbreak of the First World War pressed for an exhibition to promote British goods in markets which had been, until late 1914, dominated by imported products, especially from Germany and Austria. The result was the creation of an annual British Industries Fair (to rival the Leipzig Trade Fair, established in the Middle Ages), the first of a long series of which opened at the Royal Agricultural Hall, Islington on 10 May 1915. The organisers were overwhelmed by applications from hopeful exhibitors. Eventually it was decided that factors and wholesale dealers had to be excluded and, in spite of the Hall's vast size, there was room enough for only 591 British manufacturers. The industries represented were, among others, china, earthenware and glass; clocks, cutlery and electroplate; jewellery, including drapers' jewellery and haberdashery; printing and stationery; toys and games; and fancy goods.

Queen Mary, welcomed by Walter Runciman, President of the Board of Trade, visited the Fair on the afternoon of the opening day. Surprisingly, given wartime restrictions on international travel, trade buyers from almost every European country ('except that of Goethe') were present as well as from Canada, Australia, New Zealand and the United States, although it was feared that a group from the latter were lost with the Lusitania. One reporter was delighted to find a small exhibit organised by The Rural League (stand H 71), showing 'clever and fascinating' items 'Made by BRITISH VILLAGERS' from country areas of England and Wales. Its exhibit included carved and coloured wood toys, basketware, brushes, slatework and metalwork. Also shown was decorative leather: 'One is astonished to learn that it comes from one of the poorest agricultural villages in the South of England, where it is worked mostly by cripples, under the supervision of a lady of considerable artistic talent.' (The Scotsman, Edinburgh, Tuesday, 11 May 1915, p. 7b; The Times, London, Wednesday, 12 May 1915, p. 4)

This 1915 Fair was a great success and exhibitors were generally surprised at the number of sales they made. One specialist manufacturer received orders for over one million British-made buttons.

The British Industries Fairs went from strength to strength. Held in various locations in London and Birmingham, the 1930 event took place for the first time at Olympia, West London, where 1,152 exhibitors were given space both there and at nearby White City. Members of the Royal Family were regular visitors, perhaps the most enthusiastic being Queen Mary who was a keen observer over the years of both the Fairs' progress and of British industry in general. She was caught arriving at the 1937 British Industries Fair by a British Pathe newsreel cameraman. Other members of the Royal Family who made an appearance on the same film were the new King and Queen, George VI and Elizabeth (from 1952, Queen Mother), together with the Duke and Duchess of Kent and the Princess Royal. A Gaumont British News newsreel also covered the same event, with the reassuring and unmistakable voice-over commentary by E. V. H. Emmett: 'Queen Mary again showed interest in all she saw and again this year Her Majesty seemed to be quite tireless as she walked from stand to stand.'

Queen Elizabeth made several visits to the 1937 Fair, on one of which she bought a peach velvet Empire-style nightgown for herself in addition to stockings ('British silk stockings wear marvellously,' she said) and several bolts of silk with which to decorate the walls of some of the private apartments at Buckingham Palace into which she and the King had just moved from 145 Piccadilly. On her second visit, on 18 February 1937, the Queen inspected the pottery stalls, many of which were stocked with souvenirs of the Coronation. Of the latter, she purchased a punch bowl, decorated by 18 year old Stella Taylor, working for A.E. Gray & Co. of Stoke-on-Trent; and not to be outdone, Queen Mary secured one for herself, too.

Moving on to the stand of the British toymaker, Chiltern, the Queen found on the firm's range of toy dogs which formed a Cruft's Dog Show in miniature. She also found among the teddy bears and rabbits with muffs that 'a toy dog model, from photographs of Princess Elizabeth's Welsh Corgi, Duki, had just arrived. [She] remarked on its amazing likeness to the real Duki and had her photograph taken with it.' (see photograph)

While the notion of 'buying British' never entirely went away, the well-intentioned 'I'm backing Britain' movement of the late 1968s, which began when five Welch typists encouraged everyone to work an extra half hour each day for no extra pay for the good of the country's flagging economy, became embroiled in a wider political argument.  It descended into farce, however, when the T-shirt wholesalers, Scott Lester of London announced that they were not able to keep up with the demand for their 'I'm Backing Britain' motif shirts. That was all very encouraging, of course, until it was discovered that the shirts in question had been made in Portugal.