The bewitching lure of pearls - and their imitations by John Culme 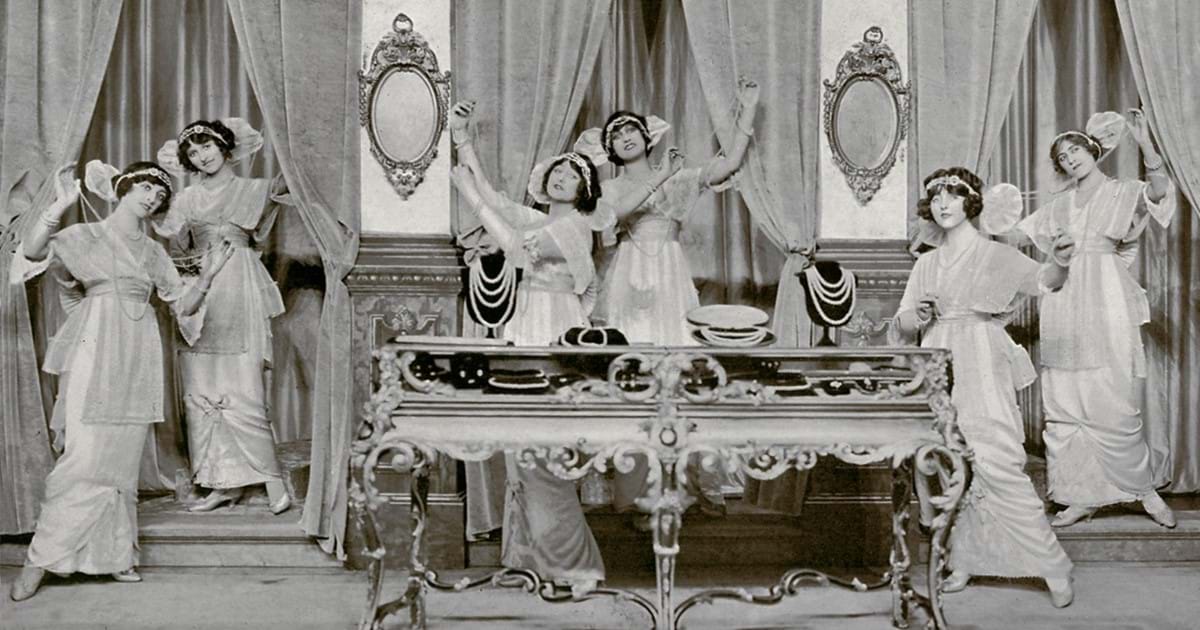 The bewitching lure of pearls – and their imitations.

'Pearls are like girls, my lord – they require quite as much attention.'

So spoke Mr. Ruby in Benjamin Disraeli's novel, Lothair (1870). Ruby, a character inspired by Charles Frederick Hancock (1807-1891), the celebrated London jeweller, had prefaced this remark by telling his noble client that,

'The Duchess of Havant has the finest pearls in this country, and I told her grace, ''Wear them whenever you can; wear them at breakfast,'' and her grace follows my advice – she does wear them at breakfast. I go down to Havant Castle every year to see her grace's pearls, and I wipe every one of them myself, and let them lie on a sunny bank in the garden, in a westerly wind, for hours and days together. Their complexion would have been ruined had it not been for this treatment.'

Harry Emanuel (later Baron de Almeda, 1830-1898), another well-known London jeweller, clearly had the same love of pearls as Mr. Ruby/Hancock; in his book, Diamonds and Precious Stones (1865), Emanuel wrote: 'From the most remote ages the pearl has been considered one of the richest gifts of nature.' As to the commercial price of fine pearls at that time, he mentioned one owned by the Shah of Persia, estimated to be worth £60,000 while the Sultan of Muscat and Oman possessed one for which £30,000 had been refused. These were truly enormous sums; today the purchasing power of the first would be approximately £5,500,000.

In the middle of the 19th century true pearls of even modest size were expensive. At the International Exhibition of 1862 in London, Constant Valès from Paris displayed two rows of pearls worth £1,100 together with 'two other rows of imitation pearls in juxtaposition worth £2 – the discriminating contemplation of which exercises a distracting effect upon the ladies.' (The Nottinghamshire Guardian, 9 May 1862, p. 2) This juxtaposition was no accident because M. Valès was actually a specialist manufacturer of artificial rather than a dealer in natural pearls.

So prized have pearls always been that countless methods of producing imitations have been devised over the centuries. By the early years of the 19th century there were several Parisian companies among the makers of joaillerie en pierres fausses specialising in the production of imitation pearls and 'pearl' jewellery. At the 7th Exposition des produits de l'industrie française in Paris in 1827, the firms of Mathias Chavassu, Rouyer (jeune) and Lelong, Constant & Forestier all gained honourable mentions for their mock pearl work. At about this time Constant Valès, formerly associated with Lelong, established his own factory. By 1834, when he was employing 15 hands together with a further 50 outworkers, he had an annual turnover of 120,000 francs. That same year, at the 8th Exposition he won a silver medal for his rich assortment of artificial pearls simulating all the varieties known in nature; he was also commended by the jury for his faux 'oriental opals,' the genuine gems of this type having been traditionally mined at Czernowitz in Hungary (now part of Slovakia).

The precise method used by Valès in his production of pearl beads was a closely-guarded secret. But some idea of the manufacturing process has survived in various contemporary publications.

Chambers's Journal of Popular Literature, Science and Arts (London, 8 April 1860, pp. 213-215) states that the 'French mode of fabricating pearls is believed to have originated about 1680 with a maker of rosaries (patenôtrier) called Jacquin.' It was he who invented Essence d'Orient, a liquid coating made from the scales of the bleak, a small freshwater fish.

'Much of the success to which the best manufacturers have now attained depends upon the perfection of the glass-rods from which the beads are blown. The operation of blowing the glass-spheres is effected with such extreme rapidity, that a good workman can detach several thousand in the day for the ordinary kind of pearls; but where the beads are intended to imitate pearls of large size and value, the blower is obliged to proceed with more caution and slowness. When the bead presents the necessary degree of fusibility and roundness, the Essence d'Orient, mixed with a certain proportion of isinglass [a gelatine-like substance made from the swim bladders of fish], is gently blown into it by means of a blowpipe. Although this part of the process converts the glass-sphere, as if by magic, into a lustrous pearl, much still remains to be done before it can be sent forth to try its chances of being mistaken for a gem of priceless value. After having been steeped in alcohol, and dried over a hot plate, the beads are filled with wax or cement, to give them weight and consistence, and carefully drilled and lined with slender tinted paper-tubes, to guard the thread on which they are to be strung from coming in contact with the wax. Lastly, an extra degree of lustre and water is imparted by exposing the beads to the action of the fumes of a mixture of bismuth and some mercurial preparation, the exact nature of which belongs to the secrets of the trade. Some manufacturers are said to wash or anoint each separate bead in a fluid obtained by careful and repeated distillation of some mercurial compound.'

Valès's success in the imitation line was crowned by his display of 'various kinds of pearls; pearl head-dresses; statuettes mounted with pearl, &c.' in London at the Great Exhibition of 1851, where he was awarded a Prize Medal. By then his son, Antoine Valès (1832-1904) was taking an active part in the business, including the establishment of a wholesale branch which opened in the City of London in 1857. Trading under the style of Gourdel, Vales & Co.,  they were described as 'importers of French jewellery and fancy articles.' By 1880, this firm advertised as 'manufacturers of all kinds of silver jewellery and all kinds of jewellery in fine imitation diamonds, imitation fine pearls, best gilt, fine steel, tortoiseshell inlaid, real and imitation jet, silver and silver-mounted smelling bottles, fans, beads (best quality), in every colour, fancy head dresses and millinery ornaments, &c.' From 1887, Gourdel, Vales & Co. was entirely in the hands of Thomas Edward Nalty (1839-1923), who began his career with the firm as a traveller, and his sons. Like so many other British firms in the luxury goods trades, Gourdel's closed at the outbreak of World War II. 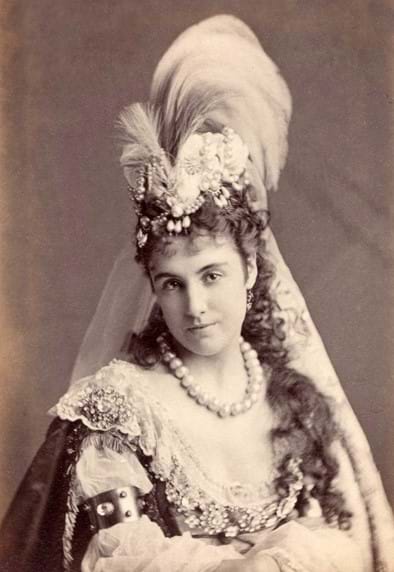 The imitation pearls of large size mentioned by Chambers were usually worn as fancy ornaments or necklaces, particularly in the late 1860s/early 1870s when 'big hair' was the vogue among the fashionable young women known collectively as 'Girls of the Period.' Click here for image. They were also widely used for theatrical costumes and head-dresses.

Following the introduction of the first cultured pearls by the Mikimoto company of Japan in 1899, imitation pearls gradually fell out of favour. Although sales continued to flourish for a while, promoted by such as the London-based Parisian Diamond Company, known for its stylish designs in paste brooches, chokers, tiaras, aigrettes, &c., it was the cultured pearl which soon dominated the market. Perhaps the first European to take advantage of these less expensive alternatives to natural pearls was Frank Joseph 'Joe' Godsol, a self-styled financier, who founded the Técla company. From the first lavishly decorated shop at 2 rue de la Paix, near the Place Vendôme, the business expanded rapidly, eventually opening outlets in London, Berlin, New York and other capital cities. Técla pearls were heavily promoted by advertising, an early example in English appearing in 1910 in the The Daily Telegraph (London, 29 August, p. 7). It read simply, 'TECLA PEARLS. NATURAL PEARLS. One made by an alchemist. The other by an oyster. The only difference} Price, Sentiment.' 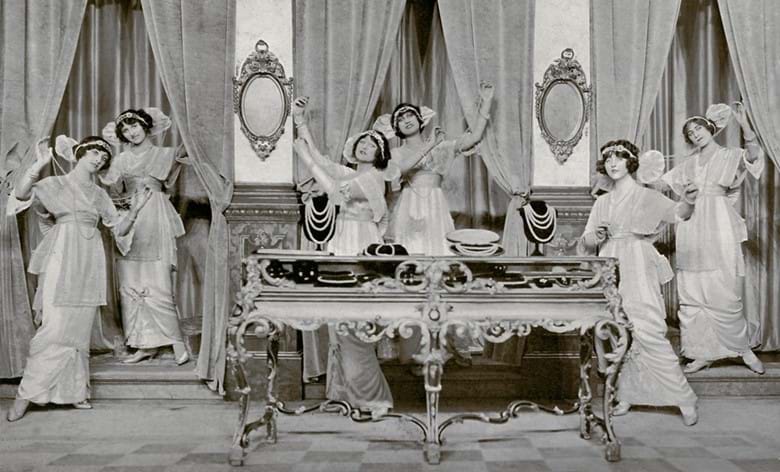 'We are the Pearl Girls of Palmyra fame.' (left to right) Kathleen Hayes, Madge Compton, Gwyneth Hughes, Lilian Gilbert, Margot Kelly and Margot Joyce as assistants in the showroom of the Palmyra Pearl Shop, a scene in the successful musical comedy, The Pearl Girl, which was produced at the Shaftesbury Theatre, London on 25 September 1913.

Not long after Técla's shop opened at 30 Old Bond Street, the brand received a powerful boost when Robert Courtneidge, the theatrical impresario produced in 1913 a long-running musical play, The Pearl Girl.  Central to the plot was the arrival in London of the beautiful Argentine, Mme. Alvarez who hears a rumour that her wonderful pearls are threatened by a gang of thieves. She immediately commissions a set of duplicates from the 'Palmyra Pearl' shop in Bond Street but matters don't go according to plan because the lady decides to cancel the order and quit England. Meanwhile, Palmyra's lady secretary, Miranda Peploe (played by Iris Hoey), in receipt of £6,000 in settlement of the fair Argentinian's debt, decides on the spur of the moment to impersonate Mme. Alvarez in English society for a season. Inevitably, the handsome Duke of Trent (Harry Welchman) falls for Miranda in her assumed role; she in turn is too much in love with the Duke to deceive him and all ends happily.

In reality, the 'Palmyra Pearls' were actually those supplied to Courtneidge by Técla. The Bystander (London, 5 November 1913, p. xvi) published a glowing column entitled, 'Pearls at the Shaftesbury.'

'The brilliant display of Técla pearls in the charming Pearl Girl now running at the Shaftesbury Theatre conjures up in woman's mind those golden days of old when pearls were fabulously common. . . . The Bond Street shop of Técla, the prototype of that staged at the Shaftesbury, recreates the atmosphere in which pearls could be so freely treated. In this delightful scene, wherein the charming Pearl Girls make so effective and dainty a setting for the splendid jewels they exhibit, the marvellous achievement of scientific gem production can be judged. For that matter the triumph of Técla may be gauged nearly as well in the stalls and boxes of any theatre in the season – on the stage or in the auditorium the pearls of this famous French house inevitably pass for Nature's gems, so perfect is the Técla laboratory's science of reproduction. . . .'

Perhaps Constant Valès was born too early. Having had the drive and energy to elevate the production of artificial pearls to new levels of excellence, there is little doubt that he would have embraced with enthusiasm this new 'science of reproduction.'