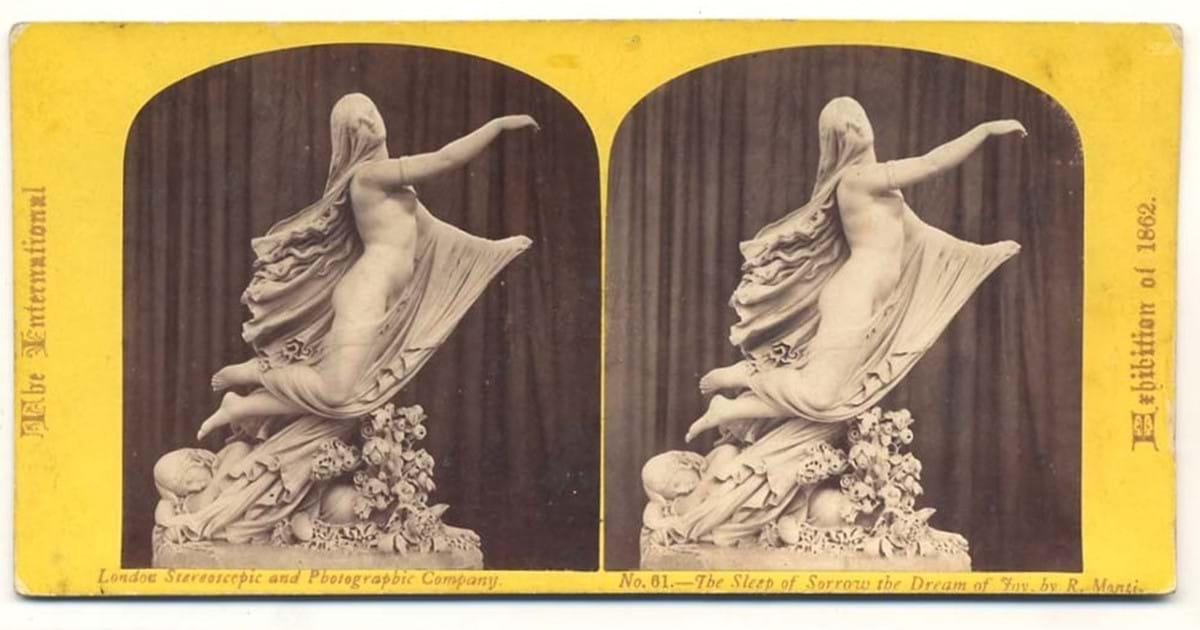 Pictured above: The marble group by Raffaelle Monti, 'The Sleep of Sorrow and the Dream of Joy' (stereoscopic photograph by The London Stereoscopic & Photographic Co Ltd, London, 1862)

Raffaelle Monti (1818-1881, the  the son of the sculptor Gaetano Matteo Monti (1776-1847) of Ravenna and Milan, was something of a prodigy. In his late teens, when he was studying under his father and the sculptor Pompeo Marchesi (1790-1858), a former pupil of Canova, at the Academy of Fine Arts of Brera, Milan, he won several prizes including the Great Gold Medal for his group, 'Alexander Taming Bucephalus.' In 1838, having completed another colossal project, 'Ajax defending the body of Patroculus,' he was invited to go to Vienna to produce various busts for the Imperial family.

Monti's sudden appearance as a widely-known celebrity sculptor in the United Kingdom coincided with the display of his work in London at the Great Exhibition of 1851. Before that he had been known in England to only a select group of wealthy patrons, for one of whom, William Cavendish, 6th Duke of Devonshire (1790-1858), he had created in 1847 his celebrated 'Veiled Vestal.' 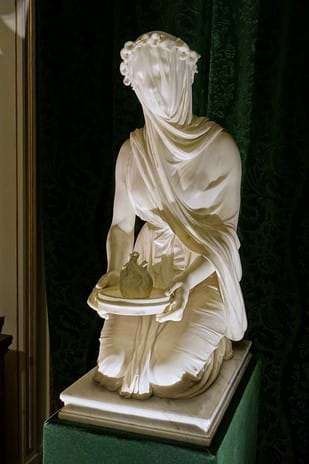 Its noble owner allowed this remarkable and remarkably beautiful marble figure to be exhibited in 1851, where it astonished and delighted crowds of sightseers. Critics, however, were not unanimous in their praise. One acknowledged the extraordinary illusion that the sculptor had achieved in representing two surfaces at once, one apparently under another, but then dismissed it as a mere 'ingenious trick.' Another wrote that the device of showing features through a simulated veil 'was a clever though facile effect, in no sense belonging to true art.' Such views, however, overlooked Monti's undoubted skills and the abilities born of natural genius and long training. Indeed, as his life's work unfolded, it became clear that there was a great deal more to Raffaelle Monti than his facility to render in hard marble the tenderness of a half-hidden face; with his fountains, interior schemes and fruitful collaboration with Hancock's, the famous London jewellers, goldsmiths and silversmiths, his name remained before the pubic for more than thirty years.

Contrary to common belief at the time, Monti was not the first to render drapery 'transparent' in marble. A celebrated exponent of the effect was the Venetian Antonio Corradini (1668-1752) whose 'Modesty,' a tomb monument of 1749-52 in Santa Maria della Pietà dei Sangro in Naples, is a noteworthy example.  Nevertheless, Raffaelle Monti brought to the genre a striking realism combined with a feeling of romantic emotion which exactly appealed to Victorian tastes.

Early in 1847 Monti made his first visit to England during which, at Colnaghi's the well-known art dealers in Pall Mall East, he exhibited, among other works, the Duke of Devonshire's  'Veiled Vestal,' which from the beginning created a sensation. Although it was not seen by a large audience at that time, The Spectator  remarked, 'The effigy of a veiled Vestal tending the everlasting flame, is a curiosity in sculpture – a feat of art. . . . The artist has chiselled the outward form of the veil, and in doing so has painted the veiled face in the light and shade glancing through the marble. He calls it ''uno scherzo'' [literally, a joke], and it is so; but it is much more – it is a very beautiful figure.'

Gaetano Monti died while Raffaelle was in London, which hastened his return to Milan where he took over what remained of his father's studio. Soon, however, he became embroiled in the increasingly volatile political situation surrounding Italy's fight for independence from Austria. He was appointed one of the chief officers of the National Guard in Milan but when on 24 July 1848 the venture ended in disaster for the Italian insurgents at the Battle of Custozza, he fled the country for the safety of London. Here, where he had acquired many patrons and friends, he remained for the rest of his life.

Following the enthusiastic reception of Monti's work at the Great Exhibition he found himself at the centre of the new Crystal Palace Company's plans to embellish Joseph Paxton's glass and iron exhibition building once it had been removed from Hyde Park to Sydenham in Kent. The building was reconstructed in 1853 on an even grander scale. In addition to providing a large amount of decorative work (including the installation and colouring of copies of the Parthenon sculptures as they would have appeared when new), fountains and statuary for the interior of the building, Monti was commissioned to furnish a number of allegorical figures for the new Crystal Palace grounds.

The Crystal Palace Company contract all but overwhelmed Monti; he had taken on so much work that his practice assumed that almost of an industrial operation. Fortunately, he was not afraid of innovation and new techniques, and to that end made use of electrotyping, patented by Elkington's in 1842, and even Portland cement. Work was still in progress at Crystal Palace when Queen Victoria officially opened the new building on 10 June 1854. During her tour she 'made a full stop before Signor Monti's great bronzes, and expressed her unqualified approbation.'

Royal approval aside, Monti was still struggling to fulfil the Crystal Palace order, with many items still outstanding, when on 9 November 1854 he was declared bankrupt; he was never good with money nor free from financial worries. Although he managed to come to an arrangement with his creditors, one of the inevitable consequences of the bankruptcy was that Monti was obliged to put his affairs in order. This was partly achieved by a sale at Christie's, held on 16 June 1855, of some prime examples of work from his studio. These setbacks didn't prevent him from working and throughout this period he was busy with various tasks, including embellishments in collaboration with Joseph Paxton for the great hall at Mentmore Towers (1857), the Buckinghamshire neo-Renaissance mansion built between 1852 and 1854 for Baron Mayer de Rothschild; and the partly gilt plaster relief over the proscenium arch at Covent Garden Opera House (1858).

In 1860 Raffaelle Monti contributed two marbles to The Royal Academy exhibition: 'Two Negro women of Senegal' and 'Piacere e dolore' (swift and slow hours), the latter described as 'a flying draped or veiled figure, and one recumbent, sorrowful and despairing. . . . very delicately carved.'

Monti employed this same device of two figures in a single sculpture to express different aspects of a theme again in 1862. This, the subject very close to his heart, was his extraordinarily effective group, 'The Sleep of Sorrow and the Dream of Joy,' in which a partly veiled nude appeared to float above another, slumbering and half hidden. Intended as an allegory of the foundation of the new kingdom of Italy, free from Austrian domination, it became one of the centres of attention when first shown at the International Exhibition at South Kensington in 1862.

Although Monti's 'The Sleep of Sorrow and the Dream of Joy' did not win universal critical approval, it found a most unexpected buyer in The London Stereoscopic & Photographic Co. Ltd.  Founded as recently as 1854 by George Swan Nottage (1823-1885), an alderman of the City of London and future Lord Mayor, the firm had won the official contract to photograph the International Exhibition interiors and exhibits.  The marble was subsequently acquired, probably towards the end of 1864, by George Edward Dering (1831-1911), the wealthy British inventor and eccentric. Eventually, a century later in 1964, this 'extravagantly fanciful' marble group, which marked the climax of Monti's 'exploration of the veiled effect', found its way to the Victoria and Albert Museum.

Elsewhere at the International Exhibition, Raffaelle Monti showed his genius in a relatively new light: that of a designer and modeller for silver groups and trophies. Although he may have explored this medium as early as 1854, it is more likely that he ventured into the field some years later. The 1861 Royal Yacht Club Cup, presented by Queen Victoria, was an early example of Monti's collaboration with Hancock's, the well-known goldsmiths and jewellers with whom he was associated until sometime in the mid 1870s. One of his most successful efforts for them was the scheme for a race 'cup,' the design for which was dominated by a group of skilfully handled figures representing ancient Britons looking across the Channel at the time of the Roman invasion.

Details are scant, but it appears that Raffaelle Monti did not prosper during the closing years of his life. It is known that he had at least one pupil, the sculptor William Charles May (1853-1931), a specialist in portrait busts, with whom he worked on and off for six years, assisting on various commissions for English clients as well as those in India and other parts of the British Empire.

According to information given by the sculptor James Nesfield Forsyth (1863-1942) to Sir Alfred George Temple, Monti lived in very reduced circumstances. He never went out until after dark on account of his financial liabilities, fearing that he might meet one of his many creditors. He had even been obliged to sell his tools. During the last year of his life, Monti lived as a boarder in the house of a German watchmaker at 90 Bolsover Street, Marylebone. It was there, with Forsyth's father alone at his bedside, that Monti died on 16 October 1881.