BLOG: 'Here we are again!' by John Culme 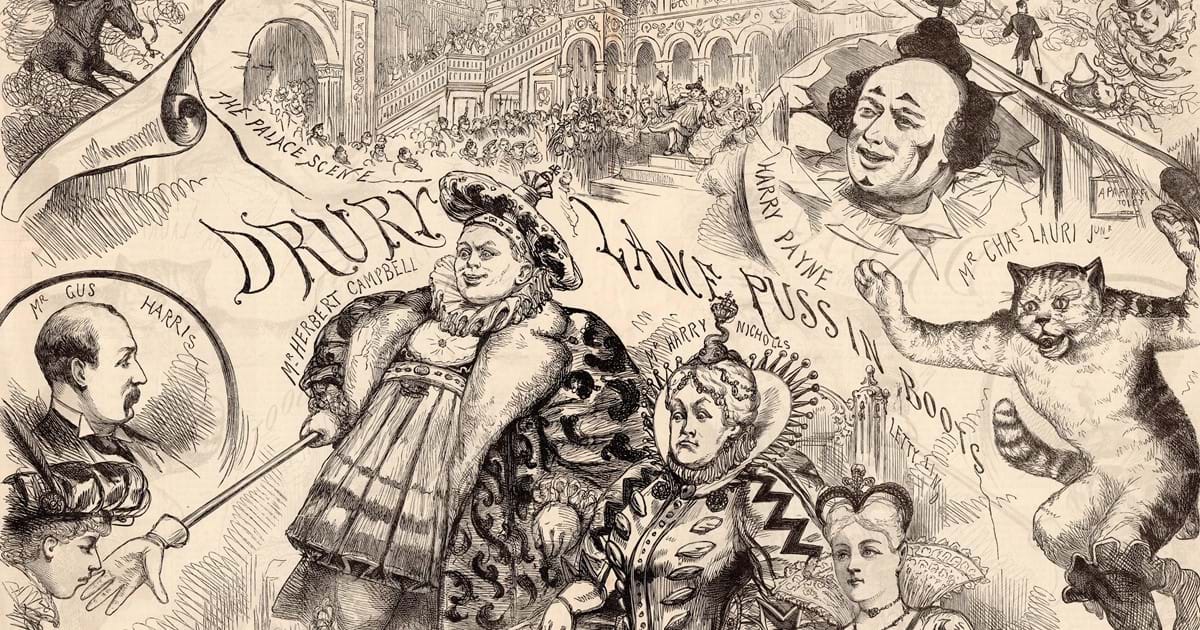 To old playgoers of a century ago the cry, 'Here we are again!' would have brought back many happy Christmas memories. It was habitually uttered by Clown, as often as not waving a string of sausages as he pranced onto the stage followed by his companions at the beginning of the harlequinade, once an essential element of every pantomime. By the 1880s, however, the romping of Clown, Harlequin, Columbine, Pantaloon and the rest were relegated to a few short scenes at the finish of the evening. At Drury Lane Theatre in 1887, for instance, the audience could be forgiven for paying scant attention to this traditional end-piece because its pantomime that year, Puss in Boots,  was an exhausting 'Four Hours' Fun and Frolic, A Feast of Splendour.' It was indeed the dying days of the harlequinade, even with the great Harry Payne (1833-1895) present in his much-loved role as Clown.

The reverse was true of Christmas pantomimes in general; we British have never tired of the old stories and devices, the nonsense of cross-dressing principals, the bewhiskered gags, the extravagant sets and costumes and the weaving-in of the latest songs and topicalities. So it was with Drury Lane's 1887 Puss in Boots. The production was received on its opening night with thunderous applause and the theatre's energetic manager, Augustus Harris (1852-1896), was several times called before the footlights in acknowledgement of his genius. Charles Lauri junior (1860-1903), a specialist in animal antics, was the cunning Puss who enriched his master with the treasures of a murdered ogre.

One of Drury Lane's posters advertising its 1887 Puss in Boots is preserved among the Evanion Collection at the British Library. It shows Puss standing on his right leg, pulling a spurred boot onto his left foot. This pose served as the inspiration for the manufacturer of diamond and enamel scarf or stick pins which were advertised for sale by Wilson & Gill, the jewellers of Regent Street during the Christmas season of 1905/06. There were many Puss in Boots pantomimes across the United Kingdom that year, along with others whose titles are still familiar: Cinderella, Jack and the Beanstalk, Beauty and the Beast, Dick Whittington and more.

Surprisingly, Olympia Auctions in our Blythe Road rooms, next to London's Kensington Olympia, is only about a mile away from the theatre on the banks of the River Thames where the very first pantomime entitled Puss in Boots was staged. As for the story itself, Andrew Lang (1844-1912), the Scottish writer and collector of folk and fairy tales, was of the opinion that, 'The plot of a young man in poverty rising to wealth by becoming the friend of an ingenious beast seems too complex and has too much of the regular novel about it to have been invented more than once.' In a lecture he gave at Toynbee Hall, Whitechapel in October 1887, he said that different versions of the tale were known from Sicily to Siberia and that, 'If the home of ''Puss in Boots'' is not India, but the country lying between Arabia and Zanzibar, it is obvious that, once it got a start, there was nothing to prevent it wandering over the wide world.'

Lang agreed that the character Puss in Boots was introduced to English readers at the end of the 17th century, in a collection of fairy stories by the French writer, Charles Parrault (1628-1703), known as Les Contes de ma mère l'Oye (Mother Goose Tales). In 1754 'Mr. Town,' in a short-lived popular weekly newspaper published in London called The Connoisseur, mused upon fit subjects for pantomimes. Because theatrical entrepreneurs, he wrote, 'are fond of introducing little children in their entertainments, suppose they were to exhibit a Pantomime of the Three Children in the Wood; - 'twould be vastly pretty to see the past-board [sic] robin red-breasts let down by wires upon the stage to cover the poor innocent babes with paper leaves. But if they must have Fairies and Genii, I would advise them to take their stories out of that pretty little book called the Fairy Tales. I am sure, instead of ostriches, dogs, horses, lions, monkeys, &c. we should be full as well pleased to see the Wolf and little red Riding Hood; and we should laugh vastly at the adventures of Puss in Boots.' (no. XLVII, Thursday, 19 December 1754).

It was only a matter of time before someone put 'Mr. Town's' suggestion into practice. And that someone was the beautiful, the scandalous, the talented Elizabeth, Margravine of Anspach, formerly Elizabeth, Lady Craven (née Lady Elizabeth Berkeley, 1750-1828). She and her second husband, who were married at Lisbon in October 1791, made their home soon afterwards in England, purchasing for £8,500 Brandenburgh House on the Thames at Hammersmith. One of the appealing features of this imposing mansion (built in the mid 1660s, demolished 1822) was that it had a small theatre. The Margravine, as Lady Craven, already had a reputation as a socialite and a playwright, finding success with such pieces as The Silver Tankard; or, The Point at Portsmouth, a musical farce produced at the Haymarket Theatre, London on 18 July 1781, starring Elizabeth Harper (Mrs. John Bannister (1757-1849), a niece of the celebrated Ludgate Hill jeweller, Philip Rundell).

Now with her own theatre to fill, the Margravine arranged over several seasons a series of private theatrical events. Private they may have been but they still attracted interest from the newspapers. The Oracle and The Daily Advertiser on 1 May 1799 informed its readers that, 'The MARGRAVINE, to render her Theatricals as inviting as possible, avails herself of the talents of Mrs. ABINGTON [the famous actress, Fanny Abington (1737-1815)] in [Vanbrugh's The Provoked Wife as] Lady Fanciful . The Hon. Mr. KEPPEL CRAVEN has composed a Pantomime, which will not want decorations or scenery to render it a delicious spectacle to the Fashionable Visitors of Brandenburgh House!' This pantomime was none other than the very first to feature Puss in Boots.

There is some dispute as to whether it was the Margravine or her youngest son, Keppel Craven (1779-1851) who was responsible for the script; either way, it was well received. 'PUSS IN BOOTS is a pantomime of much interest and whim,' wrote The Monthly Mirror (London, 1799, p. 51). 'The Margravine, in the character of Voldina, introduces many beautiful airs, which she executes with uncommon sweetness. Young Craven treads ''the light fantastic toe'' in many a merry dance. The music of the pantomime is adapted by this gentleman most happily.' But, according to The Oracle and The Daily Advertiser (29 May 1799), Harlequin was sadly missing from the piece: 'few Gentlemen have either skill or agility enough to wield a wooden sword, and jump like a squirrel!'

This modest Puss in Boots pantomime set a precedent; we have been laughing vastly at our feline hero's adventures ever since, beginning with the first professional production staged at  Astley's Royal Amphitheatre, Westminster Bridge on Monday, 25 May 1801. Entitled  Puss in Boots; or, Harlequin and The Ogre, 'an entirely new Comic Pantomimic Romance,' its stars were  Mr. E. Connell as Lord Ogre, 'a rich and sordid Necromancer,' Mr. Lasselles senior as Justin (afterwards Harlequin) and the famous French clown, Jean-Baptiste Laurent (1763-1822) as Puss. Spectacular effects, dissolves and transformations dominated the action: 'A rich Landscape View of the Ogre's Castle is followed by the representation of the Necromantic Ogre Saloon, which the magic of Harlequin forms into the Buildings of an elegant Square in an European City; and this also vanishes into a Turnpike Road, with a Flock of Sheep passing. . . . An immense Map of Europe is afterwards unrolled to the view . . . and this, by agency of Harlequin, gives place to a Grand Interior Display of the City of Paris. . . . In a subsequent part, a mass of dropping Spar Work [i.e. ships' rigging] gradually covers the Scene, and on clearing away, discovers a brilliant Fairy Hall.' (The Courier and Evening Gazette, London, Saturday, 23 May 1801, p. 1a). 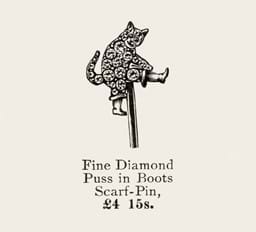 Wilson & Gill's 'Puss in Boots' scarf pins of 1905/06,  (see above left) while recalling hundreds of such happy nights in the fantastic realms of Christmastime theatre, were actually thoroughly up-to-date. Beginning in the early 1890s, a fashion grew for novelty jewellery. 'Animal brooches are well to the fore just now,' wrote The Waterford Mirror (30 September 1897), 'and apparently emerald frogs, and diamond rabbits, are among the most appreciated.' At Christmas 1900, The Goldsmiths' & Silversmiths' Co. Ltd., 112 Regent Street, were reported to have sets of very pretty lace pins set with tiny animals: 'a diamond pussy playing with a pearl ball is one of them.  (see above right).  Another is a rabbit in diamonds, contemplating affectionately a pearl turnip with diamond top. A charming terrier, with his nose in the air, is done in diamonds on a bar with a pearl at each end. In the same style are a barking dog; a squirrel on a ring; an owl with a bright emerald eye; a cat and dog, one on each end of a bar of gold, with between them a wishing-bone in gold set with a pearl; a cat, alarmed, before a monkey who holds a pearl ball, and various others. . .' (The Illustrated London News, London, Saturday, 8 December 1900, p. 852a).

So, 'Here we are again!' Even though harlequinades have been lost to history, pantomimes, including Puss in Boots, are still very much with us. So, too, are novelty animal brooches and trinkets.

The main image on Press and Blogs page: Puss in Boots, Drury Lane Theatre, 26 December 1887 with, left to right, Augustus Harris (manager) and Herbert Campbell as the King, Harry Nicholls as the Queen, Letty Lind as Princess Swedtarte, Harry Payne as Clown and Charles Lauri junior as Puss.

Pictured above right: Wilson & Gill's brooch of a diamond pussy playing with a pearl ball, 1905/06