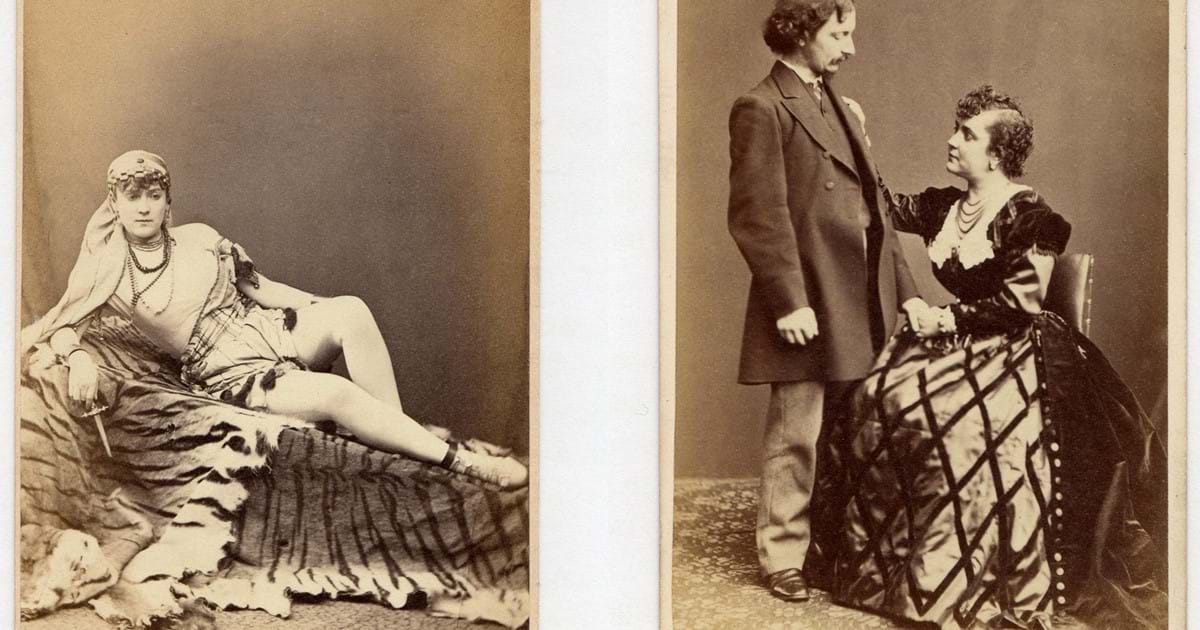 The hunger for portraits of celebrities as keepsakes – from delftware dishes in the 17th century painted with representations of royalty  to the souvenir T shirts of today – has been constant for centuries. Engraved portraits of aristocrats, politicians, thespians and others in the public eye gave way to photographs, especially after 1854, the year in which the carte de visite format was devised by the French photographer André-Adolphe-Eugène Disdéri (1819-1889). His original patent outlined a method by which he was able to take ten photographs on a single glass plate. This resulted in the ability to print the new, smaller-sized carte de visite photographs at affordable prices. Early in 1855, Frederick S.D. Phillips, manager of the London Photographic Co., 304 Regent Street, advertised comparative prices: ‘TWELVE CARTES de VISITE, 2s. 8d; Six 1s. 8d. Carte enlarged to 10 inches, 5s.; Cabinet [size photograph] 2s.’1

Surely, one of the most unlikely ‘celebrities’ to have been acclaimed in this novel form of mass-produced portraiture was William Bridge (b. 1808?), otherwise known as ‘Daddy,’ an inmate of the Lambeth Workhouse in south London. If there ever was an example of Andy Warhol’s 15 minutes of fame, this was it. ‘Daddy’ emerged from obscurity following the publication in January 1866 of an article in The Pall Mall Gazette,2 written (anonymously) by the investigative journalist, James Greenwood (1832-1927). The author told of the night he had recently presented himself as a ‘casual’ at the door of the Lambeth Workhouse, attired as ‘a sly and ruffianly figure, marked with every sign of squalor. . . . dressed in what had once been a snuff-brown coat, but which had faded to the huge of bricks imperfectly baked. . . . The coat altogether was too small, and was only made to meet over the chest by means of a bit of twine. This wretched garment was surmounted by a “birdseye” pocket-handkerchief of cotton, wisped about the throat hangman fashion; above all was a battered billy-cock hat, with a dissolute, drooping brim.’

Greenwood, who was conducted to his place in the workhouse’s ‘casual’ ward (which was little better than a unheated shed) by a kindly individual called ‘Daddy,’ gave a stark and disturbing account of the squalor and degradation he found that night. So much so that it provoked widespread discussion and many column inches in newspapers were subsequently devoted to the plight of homeless paupers. In October 1866 Dr. Joshua Harrison Stallard (1821-1895) published his book, The Female Casual and Her Lodging, in which he acknowledged that until the appearance of Greenwood’s article there was a very general ignorance both of the character of the vagrant poor and the treatment they received.3

The London Stereoscopic was not alone in their interest in ‘Daddy’; the actor manager J.A. Cave7 conceived the idea of writing a three-act ‘sensation drama’ in which he could ‘introduce a casual ward scene, and have Old Daddy to do on the stage exactly what he did in the Workhouse.’8 Reluctant at first to reprise his workhouse role on stage, ‘Daddy’ eventually agreed, and so The Casual Ward; or, Workhouse Life, written for Cave by Colin Henry Hazlewood (1823-1875), was produced at the Marylebone Theatre on 12 February 1866. Although the piece was not an unqualified success, ‘Daddy’s’ part as the ‘pauper warder’ was marked with a good deal of interest and the play ran for some weeks. ‘A scene more curious than that presented at the Marylebone Theatre on the first night of “Daddy’s” appearance has seldom been witnessed. As the curtain drew up on the second act of the piece, and revealed the casual ward of a workhouse, with the crank, pail, beds, &c., testimonies to the truth of the representation were not wanting from those who spoke with authority, and each incident in connexion with workhouse management was received with a clamour that seemed part applause and part execration. Then appeared Daddy himself – “kind old Daddy” as it is now the fashion to call him – and the applause of the house grew frantic. Daddy himself looked half pleased, half frightened. . . . “Daddy” appears to be rather over sixty years of age, is of the middle height, and rather stoutly built. He has a quick intelligent eye, white hair, beard, and moustache, has very little to say, and wears a grey suit – we presume the Lambeth uniform.’9

When the run of The Casual Ward was over, Cave arranged for a subscription for ‘Daddy’ so that he would never have to return to the workhouse. Moreover, it was suggested by the proprietor of The Welsh Harp at Hendon that he might like to ‘sell cigars in the splendid grounds surrounding the hotel and receive a percentage thereon. The old man, quivering with delight, jumped at this, and there he might be seen for years after selling his cigars and looking more like a good, honest, healthy English yeoman than an “ex-unionist.”’10

When Cave revived The Casual Ward briefly at the Victorian Theatre (now ‘The Old Vic’) in 1868, the production, ‘with pre-Raphaelite love of accurate detail,’ once again featured ‘”Kind Old Daddy” himself – an event which seems to contribute to make the old gentleman's fortune, inasmuch as he is now comfortably provided for.’11

That fateful night in 1866 also had a lasting effect on James Greenwood. Having so successfully exposed the cruel and degrading treatment of the homeless at the hands of the Establishment, he further thrust his point home by adding himself in 1869 to the list of public speakers. ‘Everyone should hear him narrate his experiences of a night in the casual ward of Lambeth Workhouse, attired in the very garb which deceived “Kind Old Daddy.”’12

Greenwood’s interest in matters social didn’t stop with problems of the workhouse system. Later that year he published his book, The Seven Curses of London, in which he dealt with several abiding problems then besetting the metropolis: ‘Neglected Children,’ ‘Professional Thieves,’ ‘Professional Beggars,’ ‘Fallen Women,’ ‘The Curse of Drunkenness,’ ‘Betting Gamblers’ and ‘The Waste of Charity.’ The frontispiece of this book is an engraved portrait of the author, based on a carte de visite photograph of him taken by Elliott & Fry whose well-known studio was at 55 Baker Street.

It is very unlikely that Greenwood’s somewhat pedestrian portrait would have featured in any window display at Elliott & Fry, The London Stereoscopic or any other of the dozens of photographers in mid-Victorian England. The public’s taste was (and is) for subjects of a more curious or sensational nature: the portrait of ‘Daddy’ was certainly the former. Of the latter, could be included the portrait by The London Stereoscopic of Adah Isaacs Menken in which she posed with the poet, Algernon Swinburne  (1837-1909).

Miss Menken, an American actress and equestrienne who had shocked and thrilled her critics and admirers equally by appearing on stage in a state of ‘nakedness’ as the embodiment of Byron’s hero, Mazeppa, was also a poetess. Her friendships in the 1860s with both Alexander Dumas père and Swinburne raised plenty of sensorial eyebrows; she was also admired by Dickens and Mark Twain. True to its editorial form, The Pall Mall Gazette, which allowed Greenwood to introduce ‘Daddy’ and the squalor of the workhouse to the public’s notice, took a very dim view of these liaisons:

‘There is no accounting for tastes. The latest novelty in photographic cartes is a group of “Miss Ada Menken and Swinburne the poet,” which may be described as “after Dumas.” As it appears in the shop windows it looks very real; but as there is a trick of photography which enables the artist to place the same person in two different positions and costumes in the same picture, we are not prepared to say that the poet and the actress posed for the carte of which we are speaking. We hope not . . . A lower deep could not be found.’13

The Pall Mall Gazette’s reference to trick photography was just a literary device, the writer well knowing that this particular double portrait was genuine. With Adah Isaacs Menken’s reputation already ‘blown to the winds,’ all London flocked to press their noses against The London Stereoscope's plate glass windows. Such was the flavour of London gossip in the 1860s!