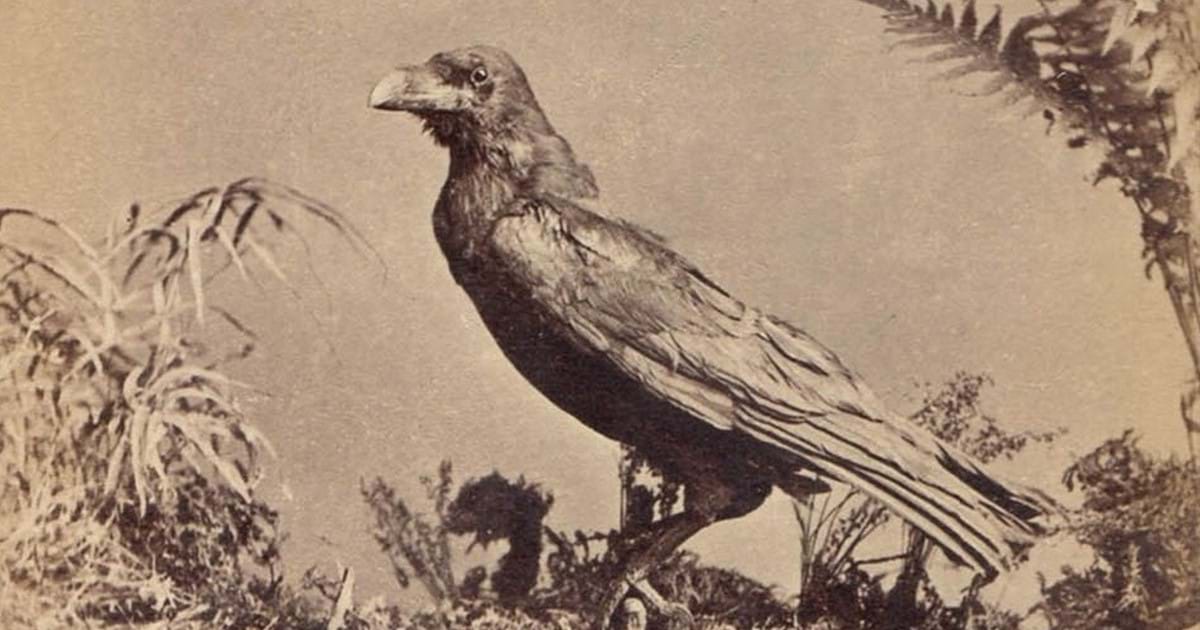 Such are the words which Charles Dickens gave as an introduction to one of his most eccentric characters: the raven, Grip in Barnaby Rudge, which appeared in serial form in 1841. In his preface to the first bound edition of the novel, published that same year by Chapman & Hall, Dickens explained that Grip was 'a compound of two great originals, of whom I was, at different times, the proud possessor.' Both birds died, the first by poison by eating some left-over white lead paint.

Dickens was in the throes of writing Barnaby Rudge when this unfortunate event took place. On 15 June 1841 he wrote to his friend, the sculptor Angus Fletcher (1799-1862) explaining what had happened:

'He was only ill a day. I sent for the medical gentleman (a bird-fancier on the New Road) on the first appearance of his indisposition. He promptly attended, and administered castor oil and warm gruel. Next day, the patient walked in a thoughtful manner up and down the stable till the clock struck twelve at noon; then staggered twice; exclaimed ''Hal-loa old girl!'' either as a remonstrance with his weakness, or an apostrophe to Death: I am not sure which – and expired. . . . He has left a considerable property, chiefly in cheese and halfpence, buried in different parts of the Garden.'

Following Grip's demise his remains were rescued from oblivion by his bereaved owner who sent him to a taxidermist to be stuffed and artistically posed in a suitable setting. It seems that Dickens's circle of friends shared in his grief; the artist Daniel Maclise (1806-1870) is said to have sketched a memorial card for the bird.

Grip remained at Gadshill, Dickens's house at Higham in Kent until the author's own death on 9 June 1870. A little over a month later, on 11 July many of Dickens's possessions were sold at auction by Christie, Manson & Woods 'at enormous prices, before an enthusiastic audience.' Lot 76 was 'Mr. Dickens's favourite raven (the ''Grip'' of ''Barnaby Rudge''); this was received with vast applause, and an animated contest at once commenced for it, the two most daring bidders being Mr. Andrew Halliday and Mr. G. Nottridge [sic] . . ., the latter eventually carrying off the raven at the price of 120 guineas. . . .'

The gentlemen who fought so eagerly to own the bird but lost, was Andrew Halliday Duff (1830-1877), the Scottish journalist and dramatist professionally known as Andrew Halliday, who had been a regular contributor to Dickens's periodical, All the Year Round. He also successfully adapted a number of works by well known authors for the stage, including Dickens. His Little Em'ly (based on David Copperfield), starring pretty Patti Josephs in the title role, was produced at the Olympic Theatre, London, 9 October 1869; Nell; or, The Old Curiosity Shop  at the Olympic, 19 November 1870; and Heart's Delight (based on Dombey and Son), at the Globe Theatre, London, 17 December 1873.

The successful bidder who paid so much for Grip, 'Mr. G. Nottridge,' was actually George Swan Nottage (1823-1885), founder and manager of The London Stereoscopic & Photographic Co. Ltd. From modest beginnings in 1854, this business rose rapidly to become one of the most ubiquitous photographers in the United Kingdom. The firm's thousands of celebrity portraits and long series of stereoscopic photographs of London's International Exhibition of 1862 are among the great legacies of Victorian commercial photography. So it should come as no surprise that Nottage was prepared to outbid everyone for Grip: he saw in Dickens's raven potential for a profit.

Little more than a month later, the London Stereoscopic Company 'issued a capital carte [de visite] of Mr. Dickens's celebrated Raven, ''Grip.'' Copies in cabinet size have also been published. The bird and its surroundings are very cleverly grouped.' Widely advertised, readers were informed that '''Grip'' stands within a rustic framework, decorated with ferns, mosses, and creeping plants, making a very pretty picture.'

When Mr. Nottage died suddenly at the Mansion House in the City of London in 1885, the very year of his Lord Mayoralty, Queen Victoria sent word that from henceforward his widow, in acknowledgement of the position and services of her  late husband, should assume the title belonging to the wife of a knight. Far from retiring exclusively into private life, Lady Nottage (née Martha Christiana Warner, 1831-1916) spent much of her energies in charitable work, as when in 1893 she organised her third ball in aid of the National Society for the Prevention of Cruelty to Children (NSPCC, founded in 1884), of which she was a member of its Central Committee.

In 1905 a dispute arose as to the fate of Dickens's Grip. Sir Henry Irving (1838-1905) , the distinguished English actor, had just died and his effects put up for sale at Christie's (15 December). Among the lots was one purporting to be Dickens's Grip; the stuffed creature was even illustrated as such in The Tatler (22 November 1905, p. 230). From her 18-room mansion in South Kensington, Lady Nottage sent word that Irving's Grip was an impostor! She told a representative of The Daily News (London, 28 November 1905, p. 9c/d) that she alone possessed the first and original Grip. '''Grip'' stands now in its original case in my library,' she said, 'just as it stood in the hall of Gadshill Place, up to the time of Dickens's death. If additional evidence were necessary, I may mention that I have just received a letter from General Kent, a mutual friend of the novelist and of my husband, in which the writer states he distinctly remembers seeing the bird at Gadshill, as far back as 1863, stuffed exactly as it is now.'

While the fate of Irving's Grip is unknown, Grip the original was eventually sold among Lady Nottage's effects by the auctioneers, Phillips, Son and Neal (17 July 1917), when he was knocked down for 78 guineas. From there his onward journey is uncertain. In 1938, at a meeting of the Bath Dickens Fellowship, the Rev. William F.D. Curtoys (1859-1948) gave a paper on Grip and his place in Barnaby Rudge, at which he displayed a stuffed raven in a glass case. He related how, while on holiday at Stratford that summer, he had discovered this Grip in a collection of antiques put up for sale at a farm near Ann Hathaway's Cottage. (Bath Weekly Chronicle and Herald, Bath, Saturday, 22 October 1938, p. 6d)

Today, Grip the original, proudly perched in his glazed rustic setting, is to be found among the treasures of the Rare Books Department of the Philadelphia Free Library in Pennsylvania. Although we have lost this remarkable bird to British shores, his place in the United State of America is just as appropriate because Barnaby Rudge's talkative raven inspired Edgar Allan Poe's chilling poem, The Raven (1845).

Once upon a midnight dreary, while I pondered, weak and weary,

Over many a quaint and curious volume of forgotten lore . . .

TOP OF THIS PAGE