Aftermath: Art in the Wake of WWI - Exhibition Review 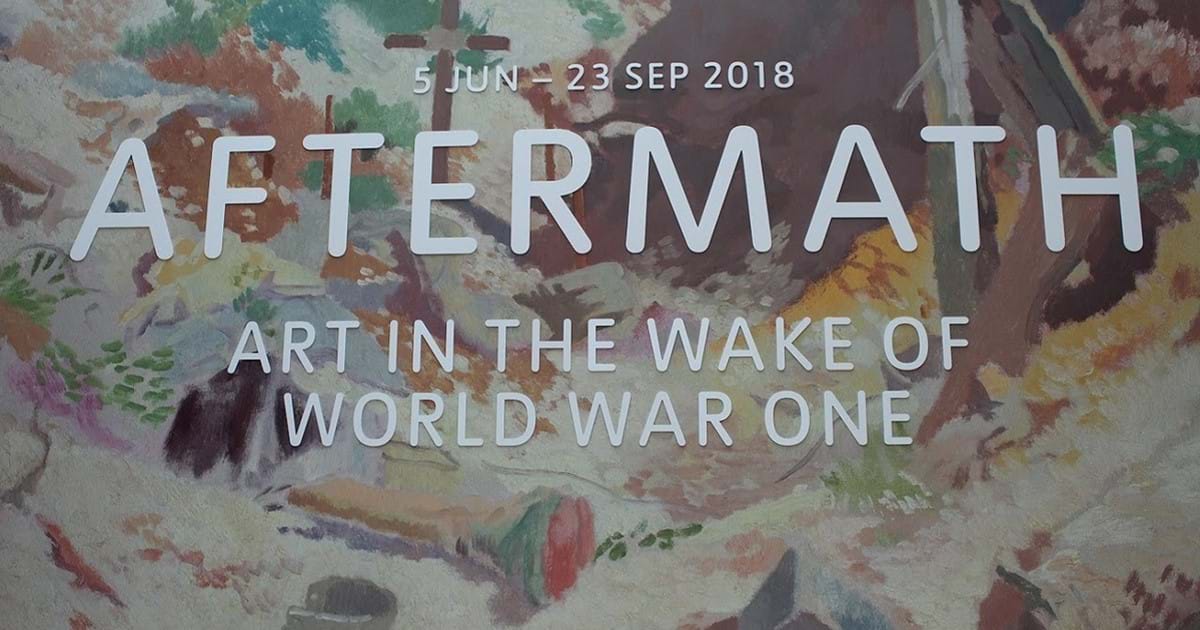 With the Picasso and the Bacon and Freud shows at the Tate in 2018, this powerful exhibition somewhat fell by the wayside in publicity terms. This may be down to the artists represented not commanding the astronomical auction prices that ignite the popular imagination; it may also be that we do not want to be reminded of the parallels between then and now. Whatever the reason, Aftermath is precisely the exhibition required for such times.

The exhibition was arranged roughly in chronological order: Aftermath, Making the Absent Present, Here Everything is Still Floating, the Return to Order and Remaking Society being the rooms’ titles. In a sense we are put into the artists’ shoes: how does one represent a seemingly endless war, then the anticlimactic shock of it ending, and the restructuring of a world permeated by deep seated unease? The one thing that hangs over the entire exhibition, by virtue of hindsight and well-drilled school syllabi, is the seeming inevitability of 1938. This is hardly acknowledged let alone addressed, and more is the pity. Perhaps it would be more difficult to tempt ticket buyers to part with their money if they can’t be placated by the end of the exhibition with the bright lights and mechanical energy of the 1930’s metropolis. This is the stumbling block of the accompanying exhibition notes, but it need not dampen the effect of much of what is on show here.

The first room juxtaposes the popular dichotomy of art at the turn of the century: on the one hand we have Jacob Epstein’s Rock Drill, a horrifying depiction of the mechanised soldier, a dehumanised figure devoid of conscience; on the other there is Charles Sims, showing us that it was and is still possible to convey a spectrum of emotions that come in the wake of mass slaughter through the more academic manner. His The Old German Front Line, Arras (1916), on loan from the IWM, has an almost synaesthesic quality: one can hear the birdsong that creeps back when humanity recedes, the wind blowing in the trees which have not yet been destroyed. In the background is a neat array of the all-too-familiar white grave markers, it seems almost too removed from the immediate conflict. But step closer to the foreground and there is the reminder: two grave markers sit, recently dug, just behind the front line. The change in the position of a trench was no protection from the utter randomness of a stray bullet.

As one walks into the second room, Charles Sergeant Jagger’s relief sculpture No Man’s Land (1919-20) occupies a large wall. Jagger did not complete this for an official memorial, and the resulting freedom to capture the brutality of the events he had been witness to is noticeable. In its composition it evokes Davide’s Liberty Leading the People; but Jagger, a former soldier, chose not to glorify or mythologise. The medium was perfect for the subject: a corpse is splayed over barbed wire, heavy and convincingly limp. In the middle, beneath where Liberty would be, a soldier stands in a hole dug up to his shoulders. He hides behind the body of a fallen comrade and grimly stares down the barrel. He is what is left of this tiny parcel of land, and he defends it because he must.

This period, in the immediate wake of the armistice, yielded some of the most poignant and reflective works and the selection here is perfectly judged. Frank Owen Salisbury’s The Passing of the Unknown Warrior (1920) is the most overtly Academic painting in the room. At first glance, it appears to be in keeping with the official line, dulce et decorum est, but this is not, cannot, be the final word. The background is filled with the enormous faceless crowds; however the top brass who lead the parade are individually distinguishable: here is Haig, here are the now forgotten household names who issued the commands on risk boards. There, walking by himself, is the King. He is the only figure whose face is downcast. In his visit to the line, George V had almost lost his life, despite his distance from the front, and the impact is said to have been significant. His downcast eyes are a moving contrast with the stiff upper lips and glazed forward stares of the generals. One of Salisbury’s sketches for the painting is in the Royal Collection, and bears the inscription, “For a thousand bitter hours console yourself with one that is beautiful”. One hopes that we are beginning to understand that there is nothing beautiful to see here, that so much could have been and can be avoided.

The Third Room of the exhibition is a revelation, containing as it does so much that is not often seen. Little in the first two rooms (save perhaps for Spencer’s Cookham painting and Epstein’s sculpture) goes beyond the well-known story of the War. What is not so often told is the story of how the world adjusted to take the warrior back into “normal” society. Sella Hasse’s One Armed War Blinded Man at the Machine (1919) title already announces the injustice of its subject. The indignity faced by so many soldiers after the war is one of the great untold stories of the 20th century. P.T.S.D. was an almost generational epidemic, and it was often compounded by miserable working conditions and a lack of employment opportunities. A lifetime of damage to self-esteem could be done to a man in a fraction of a second, just as his earning potential could be negated in the blink of an eye. Hasse’s linocut is all the more poignant, as it shows a man injured by machines, with a mechanical hand, himself helping a machine to manufacture another machine.

The fourth room, titled Dada and Surrealism, reminds us that what might appear whimsical and slightly esoteric to modern tastes germinated in a crucible of existential fear and uncertainty: Surrealism’s avoidance of normality and taste for the absurd was very much an interrogative endeavour. Artists, seeking to question long-held societal principles, developed a new semantics of painting: collage and found objects, hitherto relegated to the fringes of the avant-garde, now came to the fore in popular exhibitions. The academic style of Orpen and Jagger, though still popular with many, found fewer adherents on the continent in the aftermath of the war. This room goes some way to showing this broad reaction to the war, but it seems somewhat out of context and haphazard. Dada and Surrealism undoubtedly were reactions to the trauma of the war, but there was perhaps not enough to explain this, and it felt uncomfortable placed where it was within the narrative structure of the whole exhibition.

The smallest of the rooms was dedicated entirely to the prints of Kathe Kollowitz, Max Beckman and Otto Dix. Although the potential “reach” of the printed picture was perhaps slightly overstated in the accompanying notes - as subscriptions to prints had reached their zenith under the great Victorian dealers (Ernest Gambart being the foremost) - the artworks themselves are powerful enough without explanation. Kathe Kollowitz’s Der Krieg series was arguably the most important in this room, as it presented an altogether fresh take on the effects of war on the families of the fallen and injured. Kollowitz’s The Mothers (1921-1922) gives a voice to the parents in mourning for their children, and shows a group of mothers banded together in a huddle, with a lone child staring out at the viewer. This latter figure serves as a reminder that many of the fatherless male children went on to serve in the next war, and the brutal cycle repeated itself. Kollowitz herself referred to the war and its aftermath as “unspeakably difficult years”. Her sensitivity to the plight of those left behind is just as moving as the twisted and macabre images of Dix and Beckman: the two sides of the coin make for a very good juxtaposition here.

Overtly Marxist themes abound throughout the exhibition, as many artists understandably were compelled to comment on the appalling economic inequality between the classes following the war. The final section of the exhibition contains a number of works on this theme. George Grosz’s Toads of Property (1920) shows the wealthy industrialists alongside the emaciated factory workers, and his The Gray Day (1921) shows a comically portly businessmen with a downcast worker in uniform behind him. Such works emphasise the state of affairs in Germany after the Treaty of Versailles perhaps just as effectively as the imagined visions of PTSD in the previous rooms. Christopher Nevinson’s He Gained a Fortune but he Gave a Son (1918) poses the most interesting question in this room. An industrialist, one who profited from the War, is shown with a photograph of his son on the mantelpiece behind him. The subject is clear, but the choice to humanise the figure is unusual: there is an ambiguous expression on the sitter’s face and his far-away look could be read either as sadness or acceptance at the inevitability of his position. The sitter is in fact the Sitwell family’s butler, Henry Moat, and the painting has been reinterpreted by its subsequent titles (Mr Moat, and Bourgeois which Nevinson’s father called it) – I think it is precisely this ambiguity, given its context in a post-war exhibition, which renders it one of the most interesting works on show.

Aftermath: Art in the Wake of World War One was one of the most interesting exhibitions of 2018, and provided fantastic juxtapositions of works not often seen together, and some only rarely seen in the U.K. More could have been made of Art’s relationship to the nascent Fascist movements; and Dada and Surrealism, though most certainly deserving of a mention within a survey of art post-1917, nevertheless did not feel entirely connected to the focus of the exhibition. It did do great justice to those artists who featured most prominently, such as Nevinson, Orpen and Jagger, playing in part to the strengths of the collection; and it shed much light on an impressively wide array of different aesthetic responses to a common theme. In a centenary which featured many War-related shows and gallery exhibitions, this stood out as one of the most ambitious and finely executed. Art could never evoke everything felt by those that suffered in the war of inevitably, but this made for a very potent display.