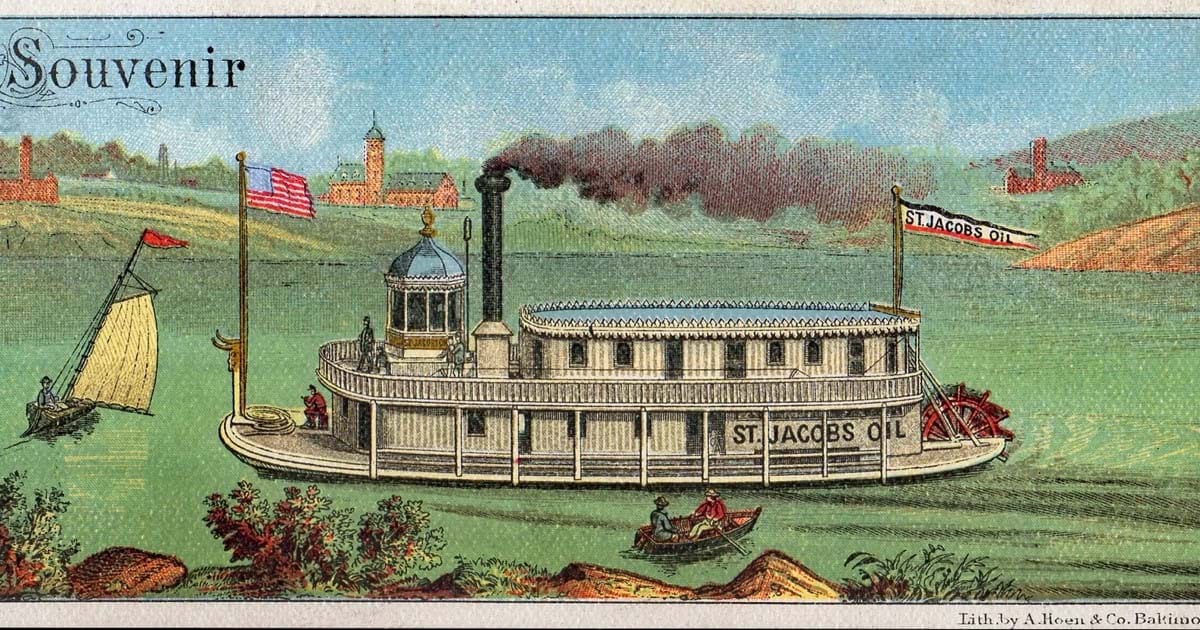 In 1881 it was widely reported in the United States’ and Canadian Press that a certain George Ridgeway of Jefferson Street, Oakland, California had had a mishap while riding his Texan pony. It appears that the horse, ‘a devilish creature,’ had suddenly stopped, humped its back and tossed the gentleman onto the ground. An excited crowd gathered, words of concern uttered, helping hands extended and poor Ridgeway, half unconscious, was carried to nearby Frank Garcia’s restaurant. There the sufferer, regaining his power of speech, cried out, ‘For God’s sake do something to relieve this horrible pain in my shoulder. It’s killing me. Have you a bottle of St. Jacob’s Oil in the house?’

We should not be surprised to learn that this story, reprinted dozens of times over the next year or so, was a none too subtle advertisement for St. Jacob’s Oil, the cure-all liniment. ‘Bodily pains are instantly relieved by the use of St. Jacobs Oil,’ ran another report. ‘Dr. R. Butler, Master of Arts, Cambridge University, England, says, “It acts like magic.”’1

Said to have been ‘prepared by German monks from the Black Forest,’ St. Jacob’s Oil (otherwise known as ‘St. Jakobs Oel,’ the name impressed in its blown-glass bottles), was sold as a remedy for the ‘permanent cure of sciatica, lumbago, &c., &c.’ Its inventor was August Vogeler (2 March 1819 – 12 June 1908), a native of Minden in Prussia, who had settled in America in his early 20s before establishing a successful import and wholesale drug business in Baltimore. It was his son, Charles August Vogeler (13 May 1851 – 15 August 1882), however, who fully exploited the St. Jacob’s Oil brand and in so doing became the pioneer of progressive medicine advertising in America and at one time was the largest advertiser of patent medicines in the world.

St. Jacob’s Oil was far from the first such remedy available and to judge from a list of ‘cures’ for rheumatism compiled by a desperate patient in 1829, the market was wide open to exploitation. Among a string of recommendations, he received the following suggestions: beef brine applied hot; live angle worms, put on crawling; cider brandy and red pepper, bathe the part, and drink plentifully; raw muskrats skin, fur next to the part affected; tar brimstone and saltpetre, mixed to a salve and applied hot; skunk’s grease; the marrow of a horse’s off hind leg; gin and saltpetre to drink; camphor and alcohol; ginger and ground red peppers, mixed with hogs lard; old shoes burnt to charcoal, pulverized and mixed with raw whiskey and vinegar to be drunk by the teaspoonful nine times a day; rattle snake’s oil; and many more.2

During the early years of the 19th century, Dr. Jebb’s Celebrated Liniment for rheumatism, bruises, sprains, numbness, stiffness of the joints, chilblains, &c. promised relief from excruciating pain to those who ‘despair of a cure, or disappointment in the efficacy of the numerous pretended antidotes used to effect this purpose.’3 This and other similar remedies, including St. Jacob’s Oil, can now be classed under the heading, ‘Snake Oil.’ In other words, quack medicines.

One remarkable feature of Vogeler’s ubiquitous advertising campaign for St. Jacob’s Oil was the creation of a special river vessel, represented soon after her launch early in 1881 as a true ‘Fairy Afloat.’ At her first sighting anchored at a Cincinnati wharf, ‘Steamboat men leveled their glasses at the pert-looking little stranger, and a curious and increasing crowd of citizens surveyed her faultless proportions, wondering what magnate of railroad or realm had come, all unheralded, into western waters with his pleasure yacht, for such the perfectly modeled little steamer appeared to be. Trapped into one of the pleasantest excursions imaginable, a large party of press representatives and friends of the enterprise were soon enjoying a delightful ride down the river, during which ample opportunity was allowed for a general look around, which resulted in the following correct description of the fairy vessel: The hull is of the finest selected white oak, braced, bolted and riveted in the most skilful and workmanlike manner, and is 65 feet in length, 14 feet breadth of the beam, two and a half feet depth of hold, and draws twenty inches of water. . . . She carries two beautiful little engines, made expressly for her, from new patterns, by the Ohio Machine Company, of Middleport, Ohio. . .’

‘Her hold is arranged in the most convenient manner, a large compartment in front being fitted with cars on tramways, so that light storage may be conveniently handled. The dining room is situated between the engine and boiler rooms, and it is artistically grained, with frescoed ceiling. The floor is covered with the finest oilcloth, and the room is furnished in Queen Anne style, with an extension table to accommodate twenty. The silver, china and table linen are of the finest and of the most inviting character. . . . The salon proper is frescoed and gilded in Eastlake style, and the flooring covered with Turkish carpet. The furniture, in raw silk and walnut, is of the Queen Anne pattern, like that of the dining hall, and rich curtains of damask complete the impression of a veritable floating palace . . .

‘She is undoubtedly the staunchest and prettiest little craft ever seen in these waters. The boat belongs to and was built under the direction of the great Baltimore house of A.Vogeler & Co., for their own exclusive use upon Western rivers, and is occupied and run by a picked crew of capable officers and men in their employ. The object of this little steamer is to carry neither freight nor passengers, so the river men need fear no competition. She was built for the firm above named, to be used exclusively by them for distributing their printed matter in the river towns, for St. Jacobs Oil, the Great German Remedy for rheumatism. . . . [The firm’s] advertising department in Baltimore is larger than that of any advertising agency in the country, and their printing establishment may be classed among the largest in the land. There must be merit in this noted German Remedy to secure such success and magnitude of business. . . . They who have spent so lavishly of their money in fitting up this little river palace have faith not only in their indomitable enterprise, but in the surpassing merits of the great remedy which they present.’4

The secret of St. Jacob’s Oil’s success, like that of Carter’s Little Liver Pills and Thomas Holloway’s pills and ointment was thanks to the skill of its universal advertising, not its formula.

In 1894, William Murrell, a well-known London physician, analysed St. Jacob’s Oil, which by then had been sold since its introduction in the late 1870s in the United Kingdom, Russia and Germany, as well as the United States. His conclusion was that the ingredients were a mixture of turpentine with traces of camphor, ether, alcohol, carbolic acid, capsicum and aconite (monkshood, a deadly poison), with traces of origanum to impart a scent. Murrell noted dryly in conclusion that the cost of the raw materials for a 2s. 6d. bottle of St. Jacob’s Oil was between 2d and 3d.5 In today’s buying power the difference is approximately £10 and £1. With such profits from the prodigious sales of St. Jacob’s Oil, there is little wonder that Vogeler & Co. could afford the luxury of ‘A Fairy Afloat.’